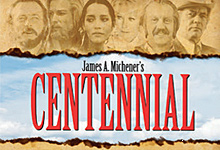 Only the Rocks Live Forever...
Advertisement:

A miniseries that aired in 1978-1979, during the heyday of TV miniseries, and based on the acclaimed James Michener novel. Just like most of his historical novels, the series follows the events set around a region of Colorado, starting the the formation of the land some million years ago! From there, it skips ahead to the beginning of western expansion. Characters and their long lines of descendants then make up the cast, as the story unfolds with the frontier they've made as their home becomes a trading post, then a cattle ranch, until a Western town slowly forms into a modern one, all over the course of two centuries.

Unlike most miniseries at that time, Centennial was possibly the longest and most ambitious of projects, with a budget of $25 million and rounding out at over 26 hours long! That's with commercials.

Now with a recap page.