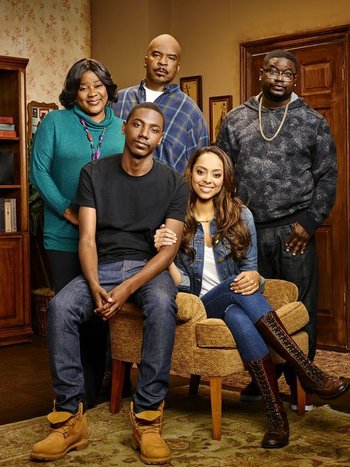 The Carmichael Show is a Dom Com created by and starring Jerrod Carmichael that began airing on NBC in the summer of 2015.

The show centers around a fictional version of Jerrod Carmichael as he tries to build a life together with his girlfriend Maxine (Amber Stevens West), while having to deal with the antics of his parents Joe (David Alan Grier) and Cynthia (Loretta Devine), and the spectacular fights between his brother Bobby (Lil Rel Howery) and his brother's hopefully-soon-to-be-ex-wife Nekeisha (Tiffany Haddish).Lil Rel Howery as Robert "Bobby

Much of the humor comes from the Carmichaels' working-class sensibilities clashing with those of Maxine's upper-class upbringing while Jerrod is stuck in the middle trying to keep everyone from getting too nasty with varying results.

At first it seemed as if NBC was burning-off yet another short-lived comedy, but after a surprisingly strong showing for the first six episodes, the network renewed the show for a second season, and then a third. In June 2017 Jerrod Carmichael announced he was stepping down from the series, after which NBC announced its cancellation.