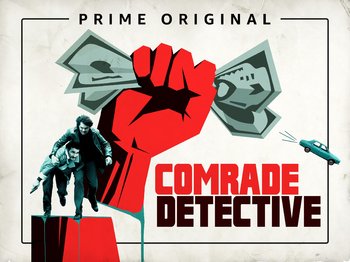 "You don't become a good communist by going to meetings, or by memorizing the manifesto; you do it on the streets, you do it with your fists"
— Gregor Anghel
Advertisement:

A satire of the politically charged American pop culture of the 1980s, it purports to be a remastered edition of Tovarăș Miliţian, a gritty crime series produced by the Romanian government in the late Cold War as a response to western works like Rocky IV and Red Dawn, to both entertain and to celebrate the ideals of communism. It follows Gregor Anghel and Iosif Baciu, two Bucharest policemen and loyal communists on a quest to unravel a capitalist conspiracy and find their friend's killer.

The series was filmed with Romanian actors in Bucharest, with the English voice cast including Channing Tatum, Joseph Gordon-Levitt, Nick Offerman, and Jenny Slate.

Tovarăș Miliţian provides examples of: note Or: Tropes present in the fictional show produced by the Romanian government. Some of these tropes might usually be considered YMMV, but given the concept, are not really to vary