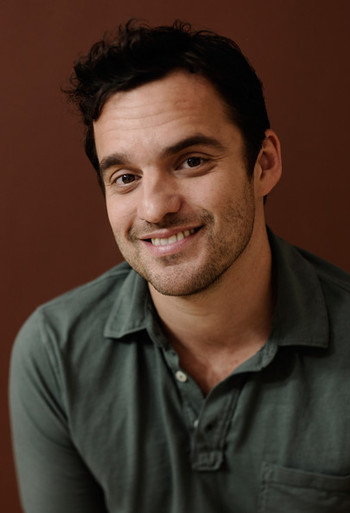 Mark Jake Johnson Weinberger, known professionally as Jake Johnson (born May 28, 1978 in Evanston, Illinois), is an American actor and comedian.

Johnson is best known for his role as Nick Miller in the FOX sitcom New Girl, which he starred in for the entirety of its seven-year run. Prior to that series, he mostly took minor roles in comedic television. He also partially inspired Drunk History, based on a particular conversation he once had with creator Derek Waters.

While on New Girl, Johnson's notoriety in Hollywood took off, with him splitting time between low-budget indie films and major blockbusters alike, the latter of which included roles in Jurassic World and The Mummy.

Johnson is also known for his voice work in animated projects. Most notably, he voices a version of Marvel Comics character Spider-Man in Sony Pictures Animation's 2018 film Spider-Man: Into the Spider-Verse. He also portrayed The Flash in 2014's The LEGO Movie.