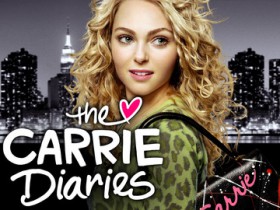 The Carrie Diaries is an American teen drama television series on The CW. It is an adaptation of the book series of the same name by Candace Bushnell and not a direct prequel to the HBO television series Sex and the City. The first season of the show focuses on Carrie Bradshaw (AnnaSophia Robb) during her junior year of high school in 1984, and she explores life in New York while interning at a law office. It ran for two seasons before being canceled.

Tropes present in The Carrie Diaries include: