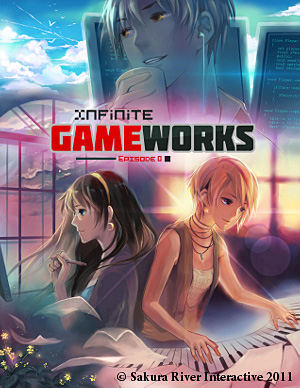 The story revolves around Justin, an Ordinary High-School Student with a myriad of talents, especially in computer programming. When Justin is not busy with school or talking with his friends in the chatroom he visits, he works at home independently on computer games he plans to sell at forthcoming conventions, with the intentions of eventually becoming a game developer. He recently took first place in a programming contest which does not escape the attentions of headstrong Aki, who constantly "encourages" him to do interesting things with his life, and quiet Cleo, who can't seem to keep herself from literally bumping into Justin at every corner. They are fellow students with Justin at Royal Prince's Academy.

Familiar with Aki's involvement with the school rock band and her music composing, and Cleo's reputation as a brilliant artist, Justin commissions each of them one thousand dollars a month to assist him in the production of future games, and even paying them from the prize money he won from the programming contest. Much time is dedicated to the development of these games, as Justin signed up to attend a convention every three months to sell them.

As everyone continues to work together, Justin learns more about Aki and Cleo, counselling them as they occasionally confide in Justin about the expectations of their parents and what career goals they should pursue. Meanwhile, Justin has recurring dreams about himself as a young library assistant from long ago and his encounters from that time, with a warning that he knows too much ...