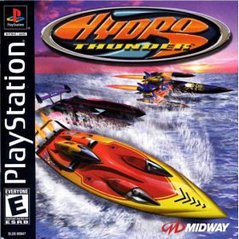 Hydro Thunder is an Arcade Game from Midway Games that was created in 1999. It's a simple arcade racing game in which you pilot a selection of high-speed racing boats in some 9 (plus 4 bonus) locations, often in a place that isn't suitable for such boats to be racing at, and in some cases, the government of where ever you'd be racing at would chase you down for a bit, and you'll be bound to crash into many a passerby, as well as to perform some insane stunts over buildings, rock formations, and who knows what else. The game was controlled by a steering wheel and a cool boat throttle with a boost button to increase the speed.

It has both the standard arcade port and set of console ports for the Nintendo 64, PlayStation, Sega Dreamcast, and in the Midway Arcade Treasures 3 Compilation Rerelease, in which the consoles were probably far better a chance to get to race on the bonus tracks, since most races are challenging to complete. One of the few games to actually not suffer from Porting Disaster in console format, although the boat throttle obviously didn't make the translation.

Though the game did not get a sequel during Midway's lifetime, it did spawn a loose series of arcade racing games focused on Nitro Boost mechanics and stunts, made up of Offroad Thunder, the Sega Dreamcast exclusive 4 Wheel Thunder, and Arctic Thunder.

A direct sequel called Hydro Thunder Hurricane was released in July 2010 for the Xbox Live Arcade. Hurricane was developed by Vector Unit, a new dev team formed by two people who worked on the "Twisted Metal in the water" game Blood Wake. Meanwhile, the arcades got a Spiritual Successor called H2Overdrive courtesy of Raw Thrills and Specular Interactive, which just happens to largely be the original Hydro Thunder development team.