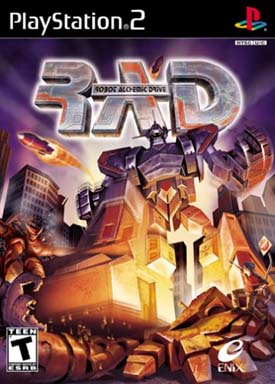 In Robot Alchemic Drive Japan is suddenly attacked by a giant robot from outer space called a Volgara. Only the scion of the Tsukioka clan (Naoto, Ryo, or Yui) has a chance at fending them off, thanks to the Humongous Mecha ("Meganite") built by their family's company.

The game had a unique control scheme, using the shoulder buttons to move the Meganites' legs, and analog sticks to throw punches. In addition, your characters weren't inside the robots, but had to find a good vantage point on the battlefield while also avoiding being stepped on.

It also cheerfully played up every giant robot trope it could get its hands on, Tetsujin #28 in particular.

Character designs were supplied by Cowboy Bebop's Toshihiro Kawamoto. You can tell because the mad scientist who invented the Meganintes has Spike's hair.