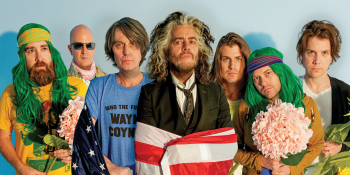 We will always love you.note Left to right: Nicholas Ley, Michael Ivins, Steven Drozd, Wayne Coyne, Jake Ingalls, Matt Kirksey, and Derek Brown.
The Flaming Lips are an Alternative Rock band from Oklahoma City, Oklahoma. They formed in 1983 and have become one of the most well known cult bands of the past 30 years. They began as a punk band but became more and more eclectic and psychedelic with the passing years. They also moved from indie labels to Warner (Bros.) Records early in The '90s, where they've remained since.note Their contract with Warners expired in 2011, which inspired the band to put out EPs of new material almost every month of that year. They re-signed their contract with the label in America in early 2012, signing with Bella Union in Europe.
Advertisement:

The band personnel has changed several times over the years, but since 1993 it's more or less been the line-up of singer/guitarist Wayne Coyne, bassist Michael Ivins - the two of whom founded the band - and long-time drummer/guitarist/keyboardist Steven Drozd.note They had an additional guitarist, Ronald Jones, between 1991-1996; Drozd became the lead guitarist after Jones's departure. Other members include guitarists/keyboardists Derek Brown and Jake Ingalls, who joined in 2009 and 2013 respectively (Ingalls is additionally the frontman for the band Spaceface), and drummers/percussionists/keyboardists Matt Kirksey and Nicholas Ley, who both joined in 2014 and also perform as the DJ duo the Brothers Griiin. note The previous drummer, Kliph Scurlock, performed and recorded with the band between 2002-2014. In 2021, Ivins retired after serving 38 years with the band.

Amongst their most acclaimed work - both critically and commercially - is 1999's The Soft Bulletin, which critics compared to Pet Sounds for its multi-layered, 'Wall of Sound' style production and poignant subject matter, as well as its 2002 follow-up Yoshimi Battles the Pink Robots, which includes "Do You Realize??", which was once the official State Rock Song of their home state of Oklahoma.

The Flaming Lips provide examples of: