Music / In the Aeroplane Over the Sea 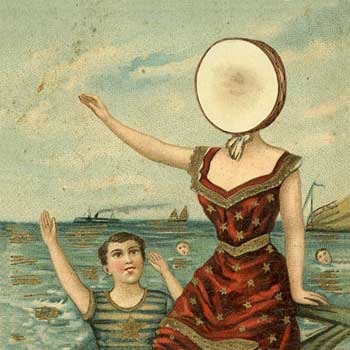 Can't believe how strange it is to be anything at all...
And one day we will die, and our ashes will fly
From the aeroplane over the sea
But for now, we are young, let us lay in the sun
And count every beautiful thing we can see
—"In the Aeroplane Over the Sea"
Advertisement:

In the Aeroplane Over the Sea (1998) is the second album released by American indie rock band Neutral Milk Hotel. It was recorded in the at the time newly formed Pet Sounds Studio, named after the lauded classic by The Beach Boys, featuring the eclectic instrumentation and bizarre lyricism that the band would be known for.

At the time of its release, frontman Jeff Mangum pressed under 8,000 copies of the album, expecting its sales numbers to be no different from their debut On Avery Island. For a while, he was right; the album was a moderate initial success and generally received enthusiastic responses from critics, but nothing laudatory, and certainly no universal christenings as a modern classic.

As journalists have retrospectively noted, the release of ITAOTS lined up quite nicely with the rise of the Internet, and as the album and band became common fixtures on message boards and in the circulations of early music outlets like Pitchfork, it received a massive cult following, elevating its status to one of the most acclaimed and celebrated indie rock albums of all time. Many would identify the most well-known aspect of the album's following as the Fountain of Memes its art and lyrics generated on 4chan's /mu/ board — memes that have almost overshadowed the real album itself.

However, this album's sudden burst in popularity was not wholly beneficial to the band. Mangum struggled with the band's newfound attention, and the stress from constant touring and being repeatedly asked to explain his lyrics bore down intensely on his mental health. Things eventually got to the point that he shut himself in his home for days on end and eventually decided that he would not be able to continue writing and performing songs, but could not will himself to express this to his fellow band members, as they had just experienced their first substantial success, and some of them had quit jobs to be in the band.

In the midst of Mangum's increasing reclusion, the band had an unspoken, unannounced breakup in 1999 after their tour for ITAOTS, and would not formally cross paths again for over a decade, eventually reuniting to tour from 2013 to 2015 before going on an indefinite hiatus.

In the aeroplane over the tropes: