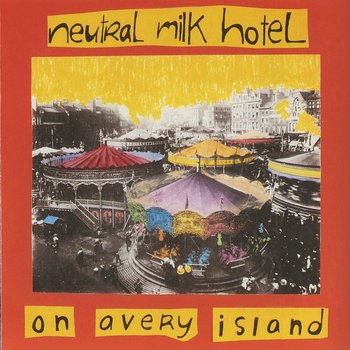 On Avery Island is the debut album by Neutral Milk Hotel, released on March 26, 1996. Recorded from 1994 and 1996, there are a few key differences between this album and Neutral Milk Hotel's more celebrated release, In the Aeroplane Over the Sea; there were five session musicians accompanying Jeff Mangum rather than the oft-remembered 1998 lineup, along with the tracks having more energy to them (best exemplified in the opening track, "Song Against Sex").

While stuck in the shadow of Neutral Milk Hotel's followup, On Avery Island is still regarded as a fine album by both critics and fans. It helped to cement the characteristic sounds featured on In the Aeroplane Over the Sea: the low fidelity, Jeff's unique voice and the bizarre lyricism. As such, it's seen a resurgence in popularity in light of ITAOTS's current cult status.

They're all waiting here for tropes: