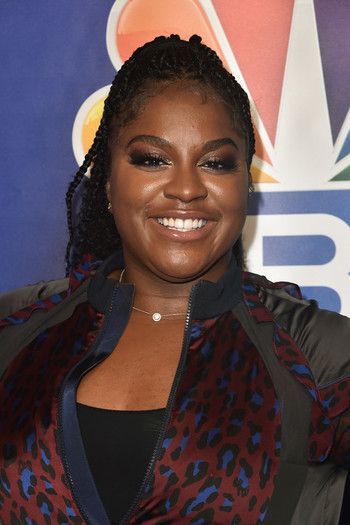 Ester Renay Dean (born December 15, 1986) is an American singer, actress, and Grammy Award-nominated songwriter. Born in Muskogee, Oklahoma, and raised in Tulsa, Ester is the youngest of five children and was raised by a single mother in a low-income household. At a young age, she learned how to channel her pain into music, using creative writing as a kind of self-therapy.
Advertisement:

Dean broke into the big leagues when she collaborated with the Norwegian record producing team Stargate and major label recording artist Rihanna to write and record Rihanna's hit song "Rude Boy". The team went on to write "What's My Name", "Where Have You Been" and several other Rihanna hits, Katy Perry's "Firework" and Nicki Minaj's "Super Bass", as well many, many other hits by a Who's Who of contemporary popular artists. The sheer number of songs Dean has written for other artists has earned her the well-deserved nickname "Ester Dean the Song Machine".

Dean's goals and dreams did not stop there. In 2012, she started her acting career, lending her voice to the hugely popular Blue Sky Studios films Ice Age: Continental Drift and Rio. In 2016, she appeared on an episode of Crazy Ex-Girlfriend.

In addition to the many songs she's written for pop stars, Dean has also contributed to movie soundtracks. When she was approached to write the end title song, "Let It Grow" for the movie The Lorax, Ester somehow managed to write and deliver the song within five hours of receiving the request.

Impressing all with her amazing work ethic, Dean was eventually asked to audition for a small role in an upcoming movie about an all-girl a capella group. She jumped at the chance and landed the role of Cynthia Rose in the hit movie Pitch Perfect, going on to reprise her role in both of the film's sequels.