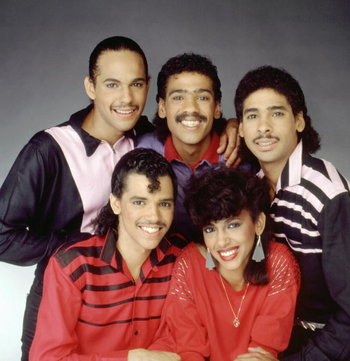 DeBarge was a family band from Grand Rapids, Michigan, whose repertoire spanned R&B, soul, pop, and funk. Active from 1979 to 1989, the group originally consisted of siblings El, Mark, James, Randy, and Bunny. Older brother Bobby (who, along with brother Tommy, was a member of another popular Motown group called Switch) and younger brother Chico would later join in 1986 and 1988, respectively.

At the height of the group's popularity, they were topping music charts all over the word. At the bottom, several members suffered from drug addiction and had drug-related arrests which would end the group in 1989. Bobby passed away in 1995 after contracting HIV and developing AIDS, and Tommy passed away in 2021 after suffering years-long health issues due to his earlier drug abuse. Despite this, they were very successful throughout the 80s, including recording the hit single "Rhythm of the Night" for the film The Last Dragon. Chico DeBarge, despite some legal issues kept his career going into the 2000s and El DeBarge would have a Career Resurrection and still performs to this day.

To the beat of the rhythm of the night, dance until the morning light...