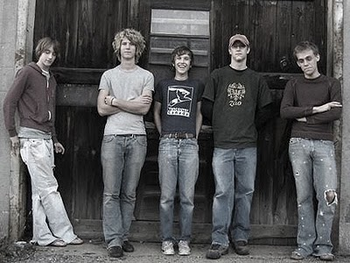 "Tell me what your worst fears are, I bet they look a lot like mine"
— La Dispute, "all our bruised and broken bodies and the whole heart shrinks"
Advertisement:

Their debut EP, Vancouver, was released in 2006 on Friction Records. They temporarily signed to Forest Life records and released two extended plays in May 2008 before releasing their debut album, Somewhere at the Bottom of the River Between Vega and Altair in November 2008 on No Sleep Records. They released three more extended plays before their second album, Wildlife.

The Band is known for playing a brand of post-hardcore indebted to Emo, Jazz, Blues, and Metalcore, with their lyrics delivered in a spoken-word or screamed style. Somewhere at the Bottom of the River drew its inspiration from the "asian folktale" told in the song "Four"

, and prominently featured uncommon time signatures and screamed vocals.Wildlife was a more subdued and introspective record that focused on stories and issues that the band had encountered. It dropped the complex rhythms of the first album and featured more melodic elements and the band playing in unison.

La Dispute released their album Rooms Of The House, on March 18, 2014 to positive reception. The album was released independently of record labels, rather through the band's own independent label named Better Living.

Compare and contrast with MeWithoutYou, and Slint.