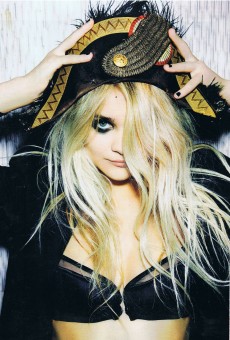 Daisy May Keeley Coburn (also known as Daisy Dares You, born 27 October 1993) is an English pop and rock Singer-Songwriter from Great Dunmow, Essex, England. Her debut single "Number One Enemy," featuring the rapper Chipmunk, was released in February 2010 after a bidding war resulted in her being signed to Jive Records. The single ultimately peaked at #13 on the charts.

Daisy had been singing, writing songs and playing both guitar and piano from a relatively young age, and modeled her creative output around "alternative" acts such as Nirvana, Courtney Love, Lou Reed, Florence + the Machine, and Bat for Lashes. In late 2007 she played a song she wrote called "Hurt" to her family and friends. In attendance was family friend Matthew Marston, who invited Daisy over to his house to record with him. She ended up recording the bulk of her demos in in Marston's studio, and Marston became her primary collaborator in songwriting and production.

Before she released Number One Enemy, Daisy had been subject to quite a bit of hype from the press. She received promotional coverage in The Times, The Guardian, and The BBC, where she was compared to everyone from Avril Lavigne to Lily Allen to even Pixie Lott (Perhaps due to their similarities in appearance). She was touted by magazines as a future "style icon" due to her distinctive grungy look and she made countless promotional appearances, both live and in other media such as television, radio and music blogs.

However, the success of her first single did not carry over to her second single, entitled "Rosie". The song failed to chart and since the single's release nothing has been said about what was to be her debut album (entitled Rush) or her music career in general.

She now works as a model and a DJ

and in 2011 did shoots for Vogue Japan and 1883 Magazine. As of 2020, she plays in the band Pink Lizards and continues to write and perform under Daisy Coburn.