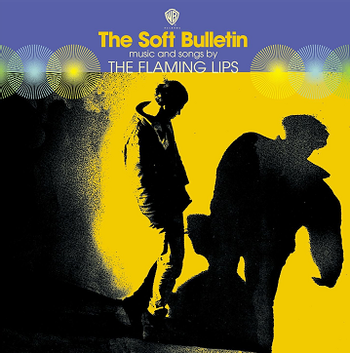 "Lookin' into space, it surrounds you / Love is the place that you're drawn to..."
Advertisement:

The Soft Bulletin is the ninth studio album by The Flaming Lips. Their commercial and critical breakthrough, it was released in 1999 and widely considered by many to be a career high in the extensive Lips canon, as well as one of the best albums of the decade— if not all time.

The bulk of The Soft Bulletin was recorded in the same sessions as the band's previous album, the four-disc surround sound experiment Zaireeka. Whilst the two are equally ambitious in scope and form, The Soft Bulletin displays a greater emphasis on songcraft and melody, and is thus the more immediately accessible.

Due to its blend of multi-layered, Wall of Sound-style production and poignant, emotional subject matter, critics often pinpoint The Soft Bulletin to being the Spiritual Successor to The Beach Boys album Pet Sounds. The album also acts as a companion piece to Deserter's Songs by Mercury Rev (which Wayne Coyne has acknowledged as a influence): both records were made in the same period, with the same producer on board (Dave Fridmann), and were massive hits at a time when both groups desperately needed them.

The Soft Bulletin is noted for being one of only 12 albums to receive a rare 10 out of 10 fromPitchfork on its initial release. (the same site note  and same reviewer, no less! which gave Zaireeka an even rarer zero); it was also ranked third on their list of the top 100 albums of the decade (behind Loveless and OK Computer).

NOTE: On its original release, The Soft Bulletin came out with two different versions for Europe and international audiences. One track was dropped from each version ("The Spiderbite Song" on the former, and "Slow Motion" on the latter), and were tagged with radio-friendly remixes of "Race for the Prize", "Buggin'" (which was never released in its original form til the album was remastered in 5.1 Surround Sound in 2006) and "Waitin' for a Superman" by Peter Mokran. This is the non-altered tracklisting originally intended by the band, which can be found on the 5.1 and vinyl reissues; the order here is reflective of the vinyl release.
Advertisement:

CD and DVD releases are across a single disc

They're just humans with tropes and children: