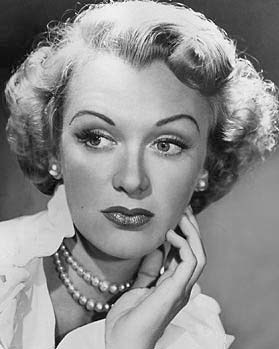 "Leave something on me; I'll catch cold."
"I once appeared as a mystery guest on a programme...and disguised my voice, raised it a few octaves and used an accent. Sixty-five people phoned in and asked if it was Eve Arden. And at that time I didn't think sixty-five people knew me."
Advertisement:

One of the great comedic actresses of The Golden Age of Hollywood, Eve Arden (April 30, 1908 – November 12, 1990) had a career that spanned more than half a century and encompassed stage, film, radio, and television.

Arden was born Eunice Quedens in Mill Valley, California. Interested in show business from an early age, she quit school and joined the stage. She had a few bit parts here and there, and even appeared in two films under her real name. Success came in the mid-1930s after she changed her name to "Eve Arden" and secured several One-Scene Wonder roles in the films Oh, Doctor and Stage Door. The success meant that she was eternally typecast as the Deadpan Snarker for the rest of her career, and she was too funny and snarky to be a leading lady. However she was still a very in-demand actress, and appeared in several famous films. She even received a Best Supporting Actress nomination for her role as Ida in Mildred Pierce.

Eve's best known project was Our Miss Brooks. It initially aired as a radio show, before getting moved to television. It received four seasons and a feature film. Her next project The Eve Arden Show wasn't as successful, but she still made appearances here and there over the next three decades - still as a snarky one-scene wonder. That's her as the principal in Grease. She died in 1990 of heart problems. Having concealed her age for most of her career, her tombstone confirms that she was eighty-two when she died.