Film / Shall We Dance? 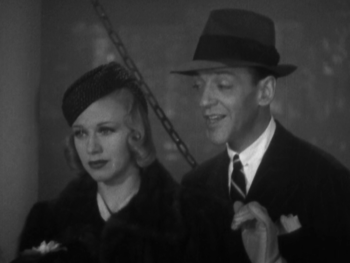 Just married, and about to be divorced.note His raised pinky is illustrating "the way she holds her knife."
A 1937 Musical Screwball Comedy film starring Fred Astaire and Ginger Rogers, directed by Mark Sandrich. The music is by George Gershwin, with lyrics by his brother Ira.
Advertisement:

Not to be confused with the 1996 Japanese film by the same title, or its 2004 American remake.

Peter P. Peters (Astaire) is a ballet star under the name of Petrov, but he longs to explore the possibilities of jazz and tap dancing—much to the disapproval of his impresario, Jeffrey Baird (Edward Everett Horton). While in Paris, Peter becomes fascinated by musical comedy star Linda Keene (Rogers) and arranges to travel with her on an ocean liner bound for New York. Peter's Stalker with a Crush, Denise Tarrington, is also aboard. In an attempt to discourage her from stirring up trouble, Jeffrey tells her that Peter is secretly married. Skeptical Denise leaks the information to Pull the Thread.

Peter and Linda hit it off and are frequently seen together, leading to speculation that Linda is Peter's wife. Linda tries to squash the rumor, as she intends to marry Upper-Class Twit Jim Montgomery, but Arthur Miller, her nearly-bankrupt producer, encourages it in hopes of staving off her proposed retirement from show business. Things come to a head when the newspapers publish what appears to be proof of the marriage: photographs of Linda in a nightgown, leaning over Peter's bed and watching him sleep. (The photos were actually faked by Arthur, who sneaked into Peter's hotel suite with a wax dummy of Linda left over from a previous stage show.)

Linda convinces Peter to marry her secretly so that they can immediately have a public divorce and squash the rumors once and for all. After the wedding, she starts to have second thoughts about divorcing him, but when she goes to his room to tell him so, she finds him with another woman—Denise, who has gotten Jeffrey to confess to his lie and is throwing herself at Peter once again. After assuring Denise that Peter really is married, Linda leaves the hotel and initiates divorce proceedings.

Some weeks later, Linda arrives at Peter's new show with divorce papers. However, when she sees the number that he created, in which all of the dancers are wearing masks of her face, her anger dissolves. By placing herself the dance among her doubles, Linda reunites onstage with a joyful Peter.

Shall We Dance provides examples of the following tropes: