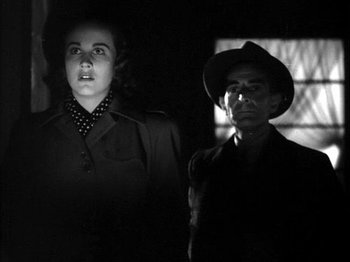 The Seventh Victim is a 1943 film directed by Mark Robson, produced by Val Lewton.

A fresh-faced young woman named Mary (Kim Hunter, in her film debut), student at a lady's finishing school, is called into the headmistress's office. It seems that her older sister Jacqueline, Mary's only surviving relative who has been paying her tuition, hasn't sent a check in six months.

Mary goes to New York and soon discovers that no one has seen her sister for quite some time. Esther Redi, who used to manage Jacqueline's cosmetics business, reveals that Jacqueline sold the business to her before disappearing. Jacqueline's friend and former employee Frances suggests that Mary ask at an Italian restaurant where Jacqueline was a regular. Mary does so, and finds out that Jacqueline rented a room above the restaurant, but never actually stayed there. She gains entry, and finds a bare, empty room—except for a simple wooden chair, staged under a hangman's noose.

Mary follows a lead to the office of handsome lawyer Gregory Ward (Hugh Beaumont, who would later be the dad on Leave It to Beaver), who was seen in Jacqueline's company. She also discovers Jacqueline's psychiatrist, Dr. Judd (Tom Conway), who claims to know where Mary is but is reluctant to reveal her whereabouts. Soon, Mary stumbles into a dark conspiracy.