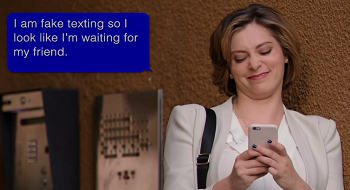 "I think I am... getting a text message. Bloop! Ah, there it is."
— Cap. Raymond Holt, Brooklyn Nine-Nine
Advertisement:

What are our characters to do when they want to look busy, avoid small talk, hide their embarrassment, back out of an uncomfortable situation, or create a minor distraction? Why, they should play with their cell phone and pretend to be texting. Cell phones and smartphones are ideal props. Always ready in our pockets or purses and no one can see what you're actually doing. Fiddling with your phone like checking social media or using applications can achieve similar results.

Perhaps the character has No Social Skills. They're extremely socially awkward and would rather pretend to be doing something else than talk to another human being. Perhaps the character Hates Small Talk: Introverts usually don't enjoy talking about unimportant stuff and will find whatever excuse not to engage in discussions with no real depth. Perhaps they just don't want to bother/be bothered and their jerk side is showing. Perhaps they only do it to create a distraction and to appear innocent if they do something suspicious.

All variants of Phoney Call are related, but pretending to be talking to someone else requires better acting skills than writing some non-sense text or actually checking your social accounts or apps. See also Fake Static.