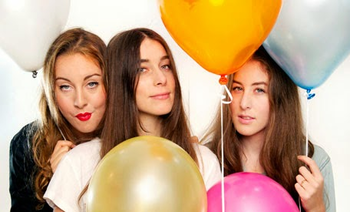 Este, Danielle, and Alana. Not pictured: that one guy.
It felt great, it felt right, but I fumbled it when it came down to the wire...
Advertisement:

Best known either for their hit "The Wire" or Este's "bass face", Los Angeles alt-rockers Haim started existence as the family classic rock cover band Rockinhaim. Mordechai (drums) and Donna (guitar) Haim played with daughters Este, Alana, and Danielle at various local events until Danielle and Este left to join the girl group Valli Girls in the early 2000s. After the breakup of the Valli Girls, Danielle went to work as a backing guitarist for Julian Casablancas and Cee Lo Green while Este completed her studies at UCLA.

In 2010 the sisters added drummer Dash Hutton, formerly of Punk Rock groups Wires On Fire and Slang Chicken, and released the EP Forever to critical acclaim. Singles "Don't Save Me" and "The Wire" kept their momentum going, but no album was forthcoming until Days Are Gone finally emerged on September 30, 2013, immediately blitzing the charts and by most accounts validating the hype. They were subsequently nominated for "Best New Artist" at the 2015 Grammy Awards, losing to Sam Smith. They then got another big break when they were tapped by Taylor Swift to be the opening act on a leg of her blockbuster 1989 tour. Their second album, Something to Tell You was released in 2017 and got mixed reviews, with it being commonly criticized for being overproduced and sounding too much like straight pop music. They won back the crowd with their third album, Women in Music Part. III, a much more raw and personal album, which earned unanimous critical acclaim and netted them two more Grammy nominations.

Haim mostly play a variant of Southern California soft rock heavily influenced by 80's pop and 90s' Contemporary R&B. Their music at times recalls top forty heroes like Eagles and TLC, though they're most often compared to a (hopefully far less dysfunctional) Fleetwood Mac and to a lesser extent, Wilson Phillips.

Their music provides examples of the following tropes: