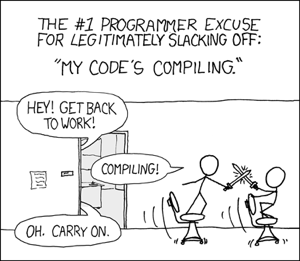 The wiki has returned the favor, taking many xkcd comics for page images (see Trivia.XKCD for the list), as well as (formerly; may he be mourned) making the image for all pages under the category "Webcomic" a little picture of Black Hat Guy.

, and was mentioned as a ticket in a changelog.

The subcomic Time, now finished, is so big that it has its own page now.

The "small game" Hoverboard also now has its own page.

Tropes appearing in this webcomic: