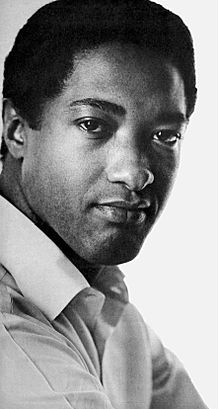 A Change Is Gonna Come
Advertisement:

Samuel Cook (January 22, 1931 – December 11, 1964), known professionally as Sam Cooke, was a musician and considered by many to be the definitive Soul singer and songwriter. His work has granted him the honorary title as the “King of Soul”. He was known for his Gospel Music-singing vocals and his blend of sensuality and spirituality.

Cooke originally got his start as a member of a gospel group called “The Soul Stirrers when he was 19. He served as their lead vocalist from 1950 to 1956. His time there help attract gospel to younger crowds, particularly girls. Cooke recorded ‘’Lovable’’, his first pop song (under the name Dale Cook) as he didn’t want to offend his gospel fanbase who had a stigma against those who performed secular music. However, the group was still displeased and so he went solo.

Between 1957 to 1964, Cooke had 30 top 40 hits plus 3 posthumously. Cooke never settled on a particular style and would perform sophisticated ballads, lighthearted songs, raspy R&B, and Rock & Roll. In addition to performing and writing, Cooke was notable for getting involved in the business side of music, something that was rare for black musicians at the time, by creating his own record label and publishing company.

On December 11, 1964, Cooke was shot and killed by the manager of a motel he was staying in. The manager claimed she killed him in self-defense after he allegedly broke into her office and attacked her. The court ruled it as a justifiable homicide though Cooke's family and acquaintances have disputed the facts of the case.

Cooke has received numerous honors since his death. He was one of the first inductees into the Rock and Roll Hall of Fame in 1986. He was inducted to the Songwriters Hall of Fame in 1987 and the National Rhythm and Blues Hall of Fame in 2013. His song ‘’A Change Is Gonna Come’’ was inducted in the National Recording Registry in 2007. He was portrayed by Leslie Odom Jr. in One Night in Miami..., a fictionalized account of a famous meeting between Cooke and his friends Malcolm X, Cassius Clay and Jim Brown.