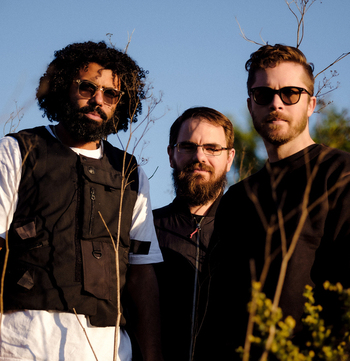 The group's signature sound revolves around screwball experimentation with the tropes and themes found in hip-hop in pretty much every way imaginable. For one, their instruments have ranged from standard fare (DAWs, samplers, drum machines) to out of the ordinary (tubular bells, a giant modular synthesizer, household objects) to just plain bizarre (test equipment, chunks of metal, highly specialized electronics, no-input feedback emulators). This also carries on to Diggs' writings — he may subvert tropes, he may avert tropes, he may even downplay or exaggerate them, but he hardly ever plays them dead straight.

Contrary to popular belief, this abrasive style is not explicitly formed as a rejection of the mainstream. In fact, they based it around the traits they found endemic to the greats of the genre. As a result, they dislike genre mashup labels such as "noise rap" and "industrial rap", self-identifying as solely a rap group.

The group started in 2009 when Hutson and Snipes, old college friends, began remixing acapellas from mainstream songs with the noise and power electronics-influenced beats they would create together for their amusement. In 2010, Hutson’s childhood friend Diggs joined and began writing his own raps over their productions. The trio later independently released the mixtape midcity in early 2013, receiving major acclaim with low expectations and minimal promotion, and signed to the record label Sub Pop five months later.

Their sci-fi concept album Splendor and Misery was nominated for a Hugo Award in 2017 in the "Best Dramatic Presentation (Short Form)" category, the first time the Hugos have recognized a music album since 1971. In 2018, their single "The Deep" was also nominated for a Hugo.