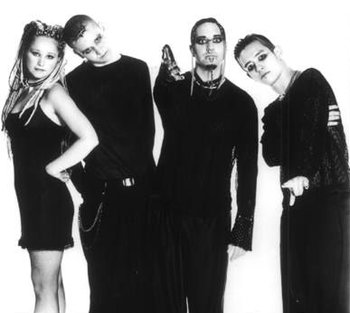 Coal Chamber then...
Coal Chamber are a Nu Metal band formed in Los Angeles, California... well, actually it'd be more accurate to say they were one of the first Nu Metal bands, and in fact the name itself comes from an early review of their music. The band is notable for not utilizing the Hip-Hop influence taken by some other bands of the subgenre; they preferred a darker, more gothic and industrial sound, and could be considered something of a precursor to bands like Slipknot.
Advertisement:

Dez Fafara (vocals) and Meegs Rascón (guitar) formed the band in 1993, and soon acquired the services of Rayna Foss (bass) and Mike "Bug" Cox (drums). After creating a local stir and being promoted by Dino Cazares of Fear Factory, the band were signed to Roadrunner Records, only to be briefly dropped when Dez quit out of disagreements with his wife. Dez wound up getting divorced (which inspired the song "Unspoiled") and rejoined the band. After being a part of the very first Ozzfest in 1996, they released their self-titled debut, lead by the single "Loco," in 1997. It remains their most successful album, going Gold in the US.

Sharon Osbourne briefly became their manager through the time of their next album, Chamber Music, released in 1999. This partnership allowed Coal Chamber to bring in Ozzy Osbourne as a guest vocalist for a cover of Peter Gabriel's "Shock The Monkey." Chamber Music in general altered the band's sound in order to have more of an electronic sheen and a better sense of melody, but the album didn't sell quite as well as the debut. 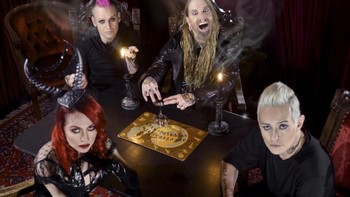 ...and Coal Chamber now.
Sharon parted ways with the band after creative differences. After "finding Christ," Rayna Foss would fall out with Fafara and leave the band herself to raise a child with Morgan Rose, the drummer from Sevendust. She would be replaced by Nadja Peulen for the ensuing tour for back-to-basics third album, Dark Days. The tour wound up fraught with infighting, culminating in an on-stage altercation in Lubbock, Texas where Dez stormed offstage after getting hit with Meegs' guitar. The band did a few more appearances, but dissolved completely in a mess of bad blood and drug abuse. After putting out the demos/rarities collection Giving The Devil His Due, Dez went on to form the band Devildriver to some success.

After Meegs and Dez publicly patched things up at a Devildriver concert (which involved a special rendition of "Loco") the band reunited in 2011 for a tour, with new bassist Chela Rhea Harper. Signing to Napalm Records, the band put out their fourth album, Rivals, in 2015. They reunited with Nadja Puelen prior to the sessions. The reunion didn't last long due to some more internal struggles, and the band went on hiatus in 2016. While Dez declared Coal Chamber dead in 2018, he clarified later that as far as one more reunion goes, he "wouldn't put it past us."

Tropes associated with Coal Chamber include: