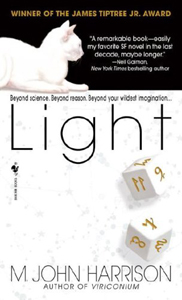 It centers around three main characters connected to the Kefahuchi Tract and its secrets. Michael Kearney is a mathematician in London, 1999, on his way to discovering a defining piece of FTL Travel; he’s also a serial killer running from a shadowy creature he calls the Shrander. Seria Mau Genlicher is a girl who became a spaceship in the space-faring future; recently she got her hands on a mysterious box that could be the key to being human again. Ed Chianese is a junkie getting tossed into transient relationships, but he keeps encountering a woman named Madame Shen who will show him the future.

Light was succeeded in 2008 by a sort-of sequel, Nova Swing. It takes place in the same universe, but only has one shared character, Liv Hula.

Not to be confused with the book of the Gone series.