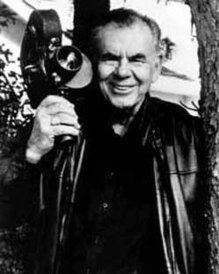 "I always had a tremendous interest in big tits."
—Russ Meyer
"He's this guy who made these awful movies during The '70s featuring these kinds of women. He's obsessed. He's obsessed with breasts. That's hard to say."
—Elaine Benes, Seinfeld "The Pilot (Part 1)"
Advertisement:

Russ Meyer (March 21, 1922 – September 18, 2004) was an American director, producer, screenwriter and cinematographer from Oakland, California best known as a pioneer of sexploitation films during the 1960s and 1970s.

"I always had a tremendous interest in big tropes":