I Hit You, You Hit the Ground 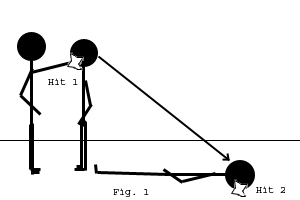 A phrase originating from... we're not really sure. The internet doesn't seem to know either. The implied threat is obvious: Screw with me, I'll punch your lights out. Obviously, it doesn't have to be the ground, just whatever surface is under your feet. A subtrope of Badass Boast, and related somewhat to Chew Bubblegum. Not to be confused with Meteor Move. For when this actually occurs, see One-Hit Kill.

Disco Kid says something in the veins of this in one of his cutscenes.

Disco Kid says something in the veins of this in one of his cutscenes.