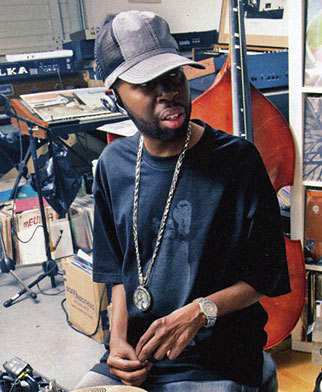 The King of Beats
Yo, Yo!
Check it out now!
It's another batch!
From the one they call Jay Dee!
— J Dilla's intro to nearly all his beat tapes
Advertisement:

James Dewitt Yancey (February 7, 1974 – February 10, 2006), known best as J Dilla (or Jay Dee prior to 2001) was an American hip hop artist known best for his soulful (and often experimental) productions, but had also dabbled in rapping as well.

The size of his entire discography (officially released or otherwise) is insane, so we're just gonna go over the highlights:

Dilla, who was considered a musical prodigy as a child, got his start in 1992 when Detroit musician and then-keyboardist for George Clinton Amp Fiddler loaned him his Akai MPC, which Dilla learned quickly. By 1995, Dilla (then known as Jay Dee) and fellow Detroit hip hop artist Phat Kat formed the group 1st Down, and were the first rap group from Detroit to get signed to a major record label. But the label folded after only one single was released, causing the group to disband.

By that time, Dilla's soulful beats were gaining notice by some of hip hop's biggest names, particularly Q-Tip of A Tribe Called Quest. This led to Tip recruiting him as a part of The Ummah, a production group that consisted of D'Angelo, Raphael Saadiq, Tip himself and fellow Tribe member Ali Shaheed Muhammad. While Dilla was not often given recognition for his work during his time in the Ummah, he did most of his big-name R&B and hip hop production during this time, which included Janet Jackson, Whitney Houston, Michael Jackson, Jon B. and several members of the Native Tongues collective (A Tribe Called Quest, Busta Rhymes, and The Pharcyde, among others).

In between working with The Ummah, Dilla and his friends from high school Baatin (Titus Glover) and T3 (R.L. Altman III) formed the group Slum Village. Between 1996 and 1997, they recorded their debut LP Fan-Tas-Tic (Vol. 1). But due to a combination of heavy bootlegging and internal politics at their record label, A&M Records, the album did not see an official release until 2005. A&M went under not long after that happened, putting the group in limbo until 2000, when they released the second volume of Fan-Tas-Tic on GoodVibe Recordings. Dilla also became a co-founder of the Soulquarians music collective around this time.

In 2001, Dilla left Slum Village to embark on a solo career, releasing several singles and his first solo album Welcome 2 Detroit. Around the same time, he dropped the "Jay Dee" alias due to often getting confused with rapper/producer Jermaine Dupri, who also went by his initials, and became J Dilla full time.

By 2002, he was signed to MCA Records, and began work on his second album The Diary and producing 48 Hours with fellow Detroit group Frank-N-Dank. Unlike his prior albums, The Diary wasn't produced by himself, but by other producers he respected, such as Pete Rock, Madlib, and a then up-and-coming Chicago producer and emcee by the name of Kanye West. Unfortunately, Dilla's streak of bad luck with major labels would continue, with MCA being absorbed into Universal Records, and all of the work he had done for the label going to waste.

Undeterred, Dilla released the album Ruff Draft overseas while his MCA album was in limbo. The album marked a noticeable change in his production style, retaining it's soulful vibe, but also becoming more experimental, with a clear electronic influence. Later that year, Dilla began doing collaborations with Madlib, which resulted in the two briefly forming the production group "Jaylib", releasing an album together called Champion Sound in 2003. Dilla also continued to release beat tapes up until 2005.

in his final years, and his health quickly deteriorated between 2003 and 2006, to the point that he showed up at a European tour in a wheelchair in November 2005.

During an extended hospital stay in Los Angeles during the summer of 2005, Some of Dilla's friends from Stones Throw Records brought him a Boss SP-303 sampler

and a small 45 record player so he could continue to produce music while in the hospital. Dilla proceeded to begin work on what would become the final album released during his lifetime: Donuts. 29 out of the album's 31 tracks were created while Dilla stayed in the hospital.

J Dilla passed away in his home on February 10, 2006, three days after his 32nd birthday, and the release of Donuts. Many of his hip-hop colleagues have paid tribute to him in the years since his death.

Albums with their own pages: