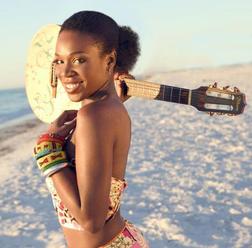 India.Arie (born India Arie Simpson; October 3, 1975) is an American Soul, R&B, and Neo Soul singer-songwriter, record producer, guitarist, and flautist. Her debut album, Acoustic Soul was released on March 27, 2001 and debuted at number ten on the U.S. Billboard 200 and number three on the Top R&B/Hip-Hop Albums. Within months it was certified double platinum and was nominated for 7 Grammy Awards, however she won none. Following the success of Acoustic Soul, India Arie released Voyage to India. This won her two Grammy Awards. In 2006 she released Testimony: Vol. 1, Life & Relationship. It was very successful landing India.Arie her first number one on the Billboard 200. Her highly anticipated next album, Testimony: Vol. 2, Love & Politics was released in 2009 and debuted at no. 3 on the Billboard 200. It featured collaborations with artists such as Gramps Morgan and Musiq Soulchild to fulfill her self-proclaimed desire to "do projects with people who are making music that is meaningful, with a lot of integrity and a lot of sonic diversity".

Her Music Provides the Following Tropes: