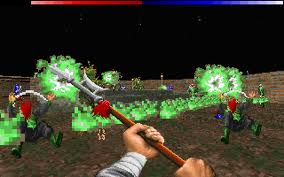 This isn't going to end well...
"Get ready to have your fucking mind blown. Alright, you see this shit? See this shit? I'm walking... Watch how fast you get buttfucked. And then, fucking crazy bitches! Yeah, the problem is, they forgot to change the rate at which the enemies can fire. So you get buttfucked in about three seconds."
—Let's Player Azurite Reaction in this video

Legend of the Seven Paladins 3D, also known as Rock 'n' Shaolin, is a Doom clone First-Person Shooter DOS game made by Accend Inc. It is rife with faulty programming and was never released, although there are demos floating around. The game moves extremely fast, and both you and the enemies move and fire at very high speeds. There are many enemies in the game who all fire at you very quickly, making the game practically unplayable. You die very often and very quickly.