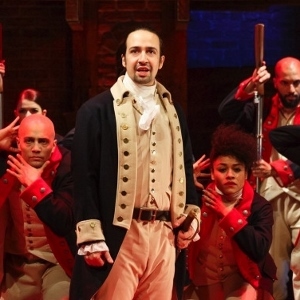 The ten-dollar Founding Father without a father, Alexander Hamilton starts out as a penniless immigrant bastard but rises up in the ranks and becomes an aide to George Washington himself. After the American Revolution, he becomes one of the most prominent politicians of the young United States, creating USA's financial system, writing in defense of the Constitution and founding the Federalist Party. 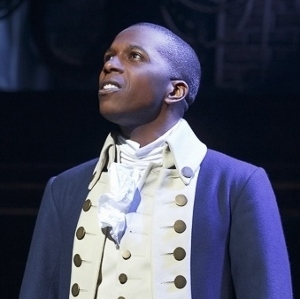 One of Hamilton's political rivals and for the most part, the narrator of the musical. Burr and Hamilton begin the story as good friends, but Burr's political ambitions and lack of strong beliefs drive a wedge in their relationship. Burr eventually gets elected as the third Vice President of the United States after losing to Jefferson. 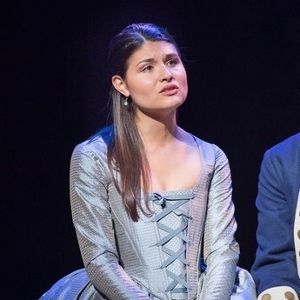 Phillipa Soo as Eliza
Originated by: Phillipa Soo (OBC)
Other productions: Krystal Joy Brown (CBO), Rachelle Ann Go (West End), Arinana Afsar (Chicago), Solea Pfeiffer (First US Tour), Shoba Narayan (Second US Tour), Julia K. Harriman (Puerto Rico/San Francisco)
"And if your wife could share a fraction of your time, if I could grant you peace of mind—would that be enough?"

Middle daughter of wealthy General Philip Schuyler, Eliza is sweeter and more passive than her older sister Angelica but falls for Hamilton just as easily. Eliza goes through a lot as Hamilton's wife, but is still fiercely loyal and self-possessed, eventually ending the story as keeper of her husband's legacy. 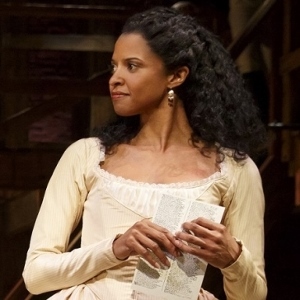 Renee Elise Goldsberry as Angelica
Originated by: Renee Elise Goldsberry (OBC)
Other productions: Mandy Gonzalez (CBO), Rachel John (West End), Emmy Raver-Lampman (First US Tour), Ta'rea Campbell (Second US tour), Sabrina Sloan (Puerto Rico/San Francisco)
"I know my sister like I know my own mind. You will never find anyone as trusting or as kind. I love my sister more than anything in this life, I would choose her happiness over mine every time."

The eldest daughter of Philip Schuyler, fierce, charming Angelica wants nothing more than an intelligent man with whom she can match wits, and is thus easily attracted to Hamilton. But she loves her family more than anything else, and sets him up with Eliza instead. 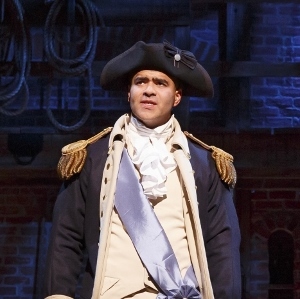 Christopher Jackson as Washington
Originated by: Christopher Jackson (OBC)
Other productions: Nicholas Christopher (CBO), Jonathan Kirkland (Chicago), Isaiah Johnson (First U.S. Tour, Puerto Rico/San Francisco), Obioma Ugoala (West End), Marcus Cho (Second U.S. Tour)
"I know that we can win. I know that greatness lies in you. But remember from here on in: history has its eyes on you."

Commander-in-Chief of the Continental Army during the American Revolution and eventual first President of the United States, Washington is a man admired even by King George for his authoritativeness and leadership. Becomes something of a father figure to Hamilton, as well as his primary political supporter. 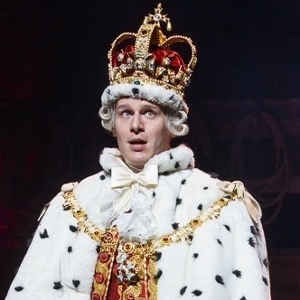 Jonathan Groff as George III
Originated by: Jonathan Groff (OBC)
"What comes next? You've been freed. Do you know how hard it is to lead?" 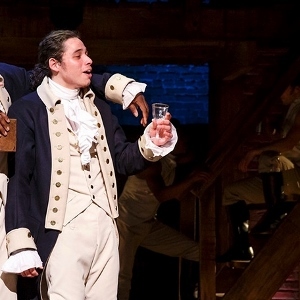 Anthony Ramos as Laurens
Originated by: Anthony Ramos (OBC)
Other productions: Anthony Lee Medina (CBO), Jose Ramos (Chicago), Rubén J. Carbajal (First US Tour/San Francisco), Cleve September (West End), Elijah Malcomb (Second US Tour),
"And we'll never be truly free until those in bondage have the same rights as you and me."

A soldier and statesman from a wealthy family who serves as one of Washington's aides-de-camp. Hamilton's best friend.

The role of Laurens is double-cast with Philip, Alexander and Eliza's eldest son. 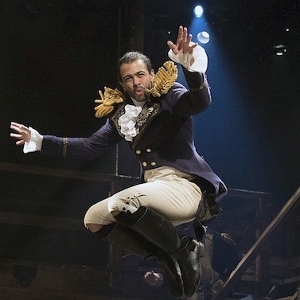 A French nobleman living in America who is instrumental in obtaining French aid for the rebels, turning the tide of the war in their favor. One of Hamilton's closest friends before he returns to France.

The role of Lafayette is double-cast with Thomas Jefferson. 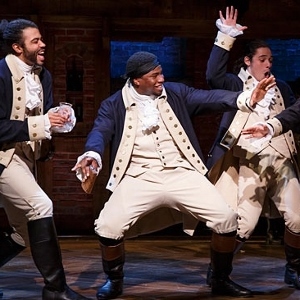 Another of Hamilton's close friends (and a fellow immigrant), Mulligan is a gifted tailor and spirited conversationalist who charms intelligence out of British officers and feeds it to the rebels.

The role of Mulligan is double-cast with James Madison. 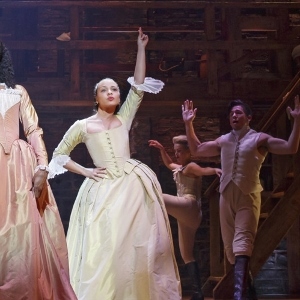 The youngest of the Schuyler sisters shown on stage. The role of Peggy is double-cast with Maria Reynolds. 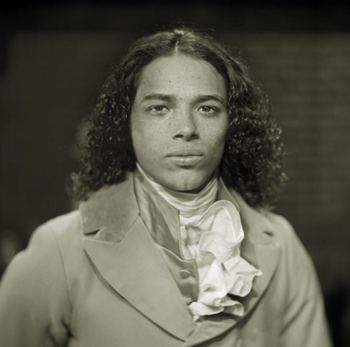 The eldest son of Alexander and Eliza Hamilton, named after his grandfather Philip Schuyler.

The role of Philip was double-cast with John Laurens. 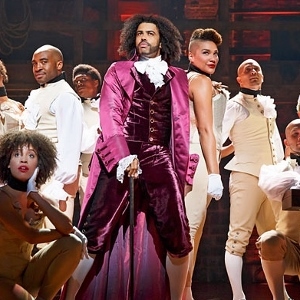 Another Founding Father, who returns from France at the beginning of Act II. Laid-back but brilliant, Jefferson opposes Hamilton's political views and forms the Democratic-Republican party to counter Hamilton's Federal party. He eventually gets elected second Vice President and third President of the United States after Hamilton supports him in the 1800 elections.

The role of Jefferson is double-cast with Lafayette. 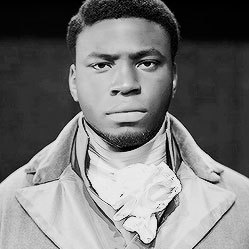 A former ally of Hamilton's who ends up siding with Jefferson and company. Will go on to be the fourth president of the United States.

The role of Madison is double-cast with Hercules Mulligan. 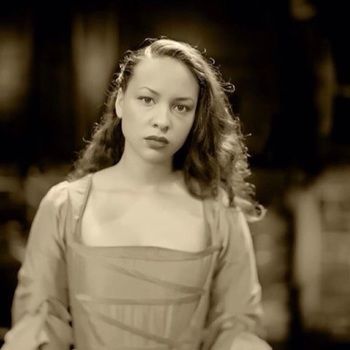 Maria Reynolds comes to Hamilton in a time of personal crisis, eventually beginning an affair with him. Her husband James uses this affair as blackmail, extorting money out of Hamilton to keep him quiet. When Hamilton's political rivals begin sniffing around his spending, Hamilton is forced to reveal the details of his affair with Maria in order to clear his name — making his family miserable in the process.

The role of Maria is double-cast with Peggy, the youngest Schuyler sister. 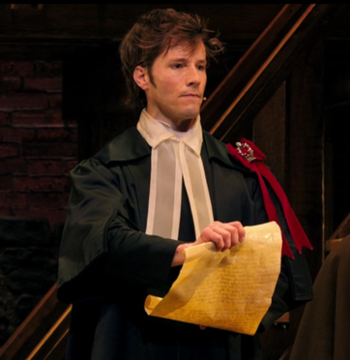 A bishop who advocates for America to remain a British colony. His work is harshly criticized by Hamilton. 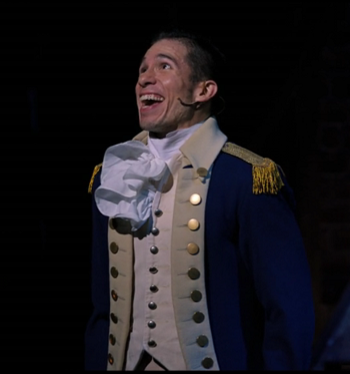 An incompetent general who is responsible for the near-destruction of the Revolutionary Army at the Battle of Monmouth. 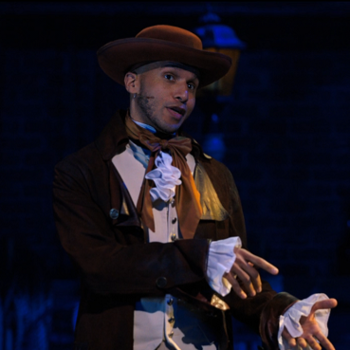 Husband of Maria Reynolds. He blackmails Hamilton for money in exchange for not telling anyone about Hamilton's infidelity. 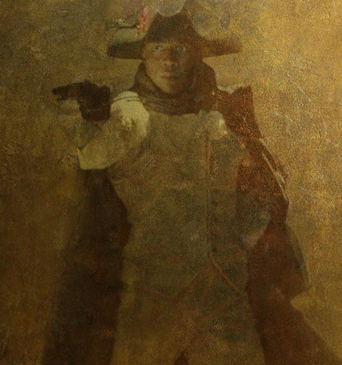 Ephraim Skyes as George Eacker
Originated by: Ephraim Sykes (OBC)
"Your father's a scoundrel—and so, it seems, are you."

A lawyer who insults Alexander Hamilton and is challenged to a duel by Alexander's son Philip over it.

The hapless second President of the United States. His attacks on Hamilton severely damage the Treasury Secretary's already-precarious reputation.

Aaron Burr's mistress and later, wife. Already married to a British officer, but the mother to his daughter of the same name.

Founding Federalist and co-author of the Federalist papers, alongside Alexander Hamilton and James Madison.

Father of the Schuyler sisters.