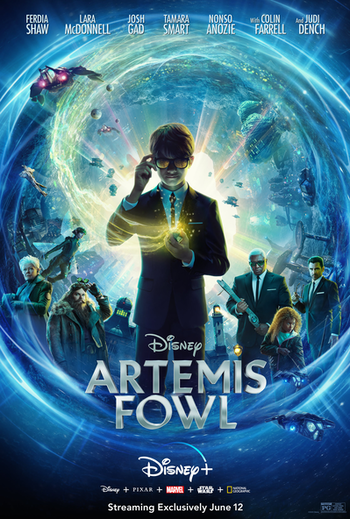 Criminally good.
"Our world has never been in more danger. Human greed is what drove us underground all those years ago, to escape from your rapacious appetite. I warn you, boy, you are not prepared for the truth behind what you seek. Now you will believe, Artemis Fowl."
— Commander Rootnote Quote is from a Missing Trailer Scene
Advertisement:

Artemis Fowl is a science fiction adventure film directed by Kenneth Branagh. It is mostly an In Name Only adaptation of the book series of the same name by Eoin Colfer.

It includes the following cast members:

The film was initially set for theatrical release, but in light of the COVID-19 Pandemic forcing the widespread closure of movie theatre chains, it was instead moved to Disney+ where it was released June 12, 2020.