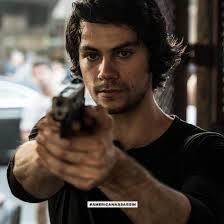 If you're in his cross-hairs, run.
"My guess is, if you and I go hand to hand you could probably figure out inside twenty seconds whether or not if I have what it takes to make through your selection process. So, what do you think?"
— Mitch Rapp
Advertisement:

The story focuses on troubled young man Mitch Rapp and his desire to kill terrorists all around the world after one killed his girlfriend before his very eyes. Mentored by Stan Hurley, he and an elite team of assassins must travel the globe to save it from destruction.

This film is based on the book series and stars Dylan Obrien and Michael Keaton.