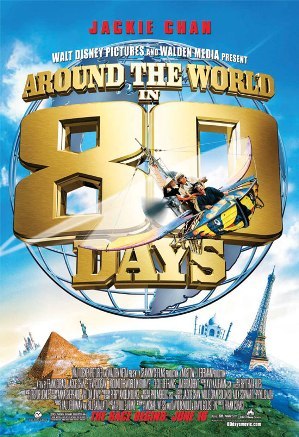 The 2004 film adaptation of Jules Verne's Around the World in 80 Days. It stars Jackie Chan, Steve Coogan and Cécile de France. The film is set in 19th-century Britain and centers on Phileas Fogg (Coogan), here reimagined as an eccentric inventor, and his efforts to circumnavigate the globe in 80 days. During the trip, he is accompanied by his Chinese valet, Passepartout (Chan). For comedic reasons, the film intentionally deviated wildly from the novel and included a number of anachronistic elements.
Advertisement:

The film is notable for being Arnold Schwarzenegger's last film before he took a hiatus from acting to become Governor of California.

The film was nominated for two Golden Raspberry Awards: Worst Remake or Sequel and Worst Supporting Actor (for Arnold Schwarzenegger).

Around the World in 80 Days provides examples of: