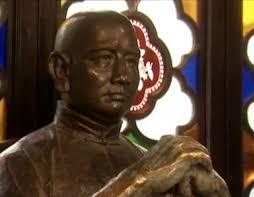 A statue of Wong Fei-Hung in Foshan, China. Movies tend to give him a whole lot of Adaptational Attractiveness to boot.
Advertisement:

A Chinese Folk Hero, Wong Fei-hung (1847-1924) was a Real Life historical figure and Martial Artist. Fei-hung (his given name, with Wong being his family name) was the son of Wong Kei-ying, one of the Ten Tigers of Canton and the man who trained Fei-hung. Fei-hung is the most famous practitioner of the Hung Ga style of Kung Fu, a style most famous in the west for being the basis of Earthbending in Avatar: The Last Airbender. In addition to his martial skill, Fei-hung was also a physician, practicing traditional Chinese medicine at Po-Chi-Lam, a clinic on Foshan that he opened.

Fei-hung has been portrayed in film 89 times (77 of which were by Kwan Tak-hing, which is the cinematic record for most times an actor has portrayed the same character). In addition to the many portrayals of Wong Fei-hung himself, he has been a direct inspiration for a great many other fictional characters.

Fictional Characters Based on Wong Fei-hung: