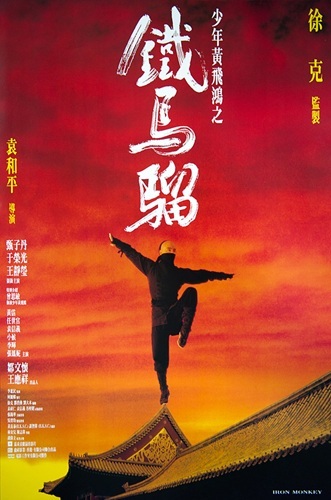 Iron Monkey, starring Yu Rong-guang and Donnie Yen, is the 1993 fictionalized account of an episode in the childhood of Wong Fei-Hung, better known to American audiences as the protagonist of the smash hit Martial Arts film series Once Upon a Time in China, starring Jet Li. The premise can be summed up in four words: Robin Hood in China!

The titular hero of this film is Doctor Yang Tian-Chun, a philanthropist and master martial artist who runs the only clinic in town. He overcharges the rich and corrupt patients and offers free care to the poor by day. By night, he dons the Iron Monkey costume and goes around beating up corrupt monks and stealing money from the greedy politicians. Hero to the poor, menace to the rich.

While Yang is busy patching up the guards he was beating the crap out of last night and making polite conversation with the man obsessed with catching him, a man named Wong Kei-Ying arrives in town and immediately becomes the victim of an attempted mugging. Wong Kei-Ying is one of the Ten Tigers of Canton, the ten greatest warriors of Real Life 19th Century Southern China, as well as a well-regarded doctor. Travelling with him is his young son Wong Fei-Hung, who will one day inherit his father's Canton Clinic of Po Chi Lam and his status as a folk hero.

Through a series of misunderstandings, Wong Kei-Ying is mistaken for the Iron Monkey by the corrupt local guards. At his trial, however, the REAL Iron Monkey shows up and wreaks havoc, and Wong fights him to a stalemate. Seeing this, the government instead hires Wong to take down the Iron Monkey himself. As added incentive, they take his son hostage and give him one week to do it.

Meanwhile, because the lecherous magistrate has proved incapable of apprehending Iron Monkey, the corrupt Manchu government sends a treacherous Shaolin monk to replace him, setting the stage for a cataclysmic final battle atop a forest of poles in a literal sea of fire.