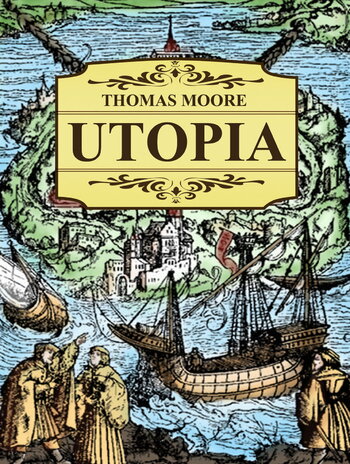 Utopia is a 1516 satirical philosophical treatise by Thomas More, detailing the government and customs of a certain island nation which has (possibly) created the ideal society. Trope Namer for Utopia (lit. "good place") and by extension Dystopia ("wrong/bad place"). The name itself is a pun on the Greek ou (no/not) vs eu (good) — the island is "no place;" which is to say, entirely fictional.

While in Flanders on business, More and his associate Peter Giles run into a New World traveler named Raphael, whose travels have exposed him to many other societies and given him a new perspective from which to judge England's particular flaws and foibles. When he begins to describe Utopia, a remarkable island on which he lived a number of years, More and Giles are fascinated and take him aside for a whole afternoon to hear more about Utopia and its laws, customs, and so on — this account takes up most of the book. Afterward, More concludes that he would like to see England adopt the same system, though he doubts it ever could.