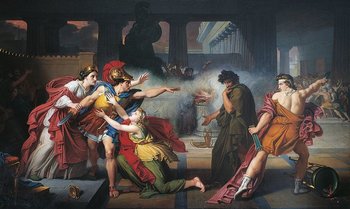 The Thebaid is a 1st-century epic by Statius detailing the fated war between Oedipus' son-brothers for the throne of Thebes.

Modeled off The Aeneid, The Thebaid repeats and expands upon a classic sequence of stories from Classical Mythology in twelve books of verse. The first six books see the exiled Polynices arrive in Argos as the gods of Olympus and Styx move him to wage war against his brother, King Eteocles. The latter six cover the war itself as Polynices and the rest of the seven against Thebes reckon with their cruel fates.

As the title suggests, the history of Thebes is of great importance to the work and there are frequent references to the events that shaped the city. The wanderings of Cadmus, the birth of Bacchus, the blasphemy of Tantalus, the death of Niobe, and especially the tragedy of Oedipus all shape how the gods regard the war, but outside of the distant past, Argos is the city that gets the most focus. The protagonist is a leader of said city and the other six (Amphiaraus, Tydeus, Parthenopeus, Hippomedon, Capaneus, and King Adrastus) all feature prominently in multiple episodes. In terms of Thebes, only Polynices' family and Creon have major appearances in multiple books.

Statius would go on to attempt another epic in the style of The Thebaid with his Achilleid, but his death left only a sample of The Achilleid completed. It would be left to readers like Dante Alighieri and Geoffrey Chaucer to truly succeed his work with their own masterworks that bear his influence.

The Thebaid contains examples of the following: