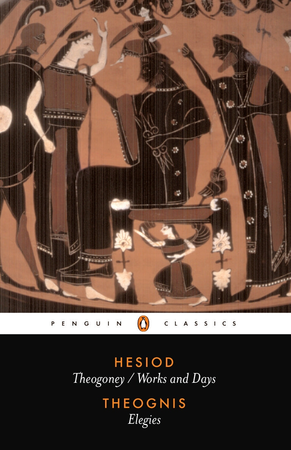 As the Muses taught Hesiod, in the beginning there was Chaos — and indeed, this is one of the most chaotic texts in the world's literary canon. Written most probably circa 700 BCE in classical epic dactylic hexameter, it is mainly a genealogical treatise with not a few elements of theological gossip about which god slept with whom and who was born as a result. "Theogony" means "The Origin of Gods", and it is Exactly What It Says on the Tin. Presenting the whole divine family on one genealogical tree is almost

impossible, but the Greeks apparently had little problems with memorizing all the details, as numerous stories from Greek mythology are perfectly consistent with the version of events described in Theogony (though, to complicate things even more, there is also a rival version written by Pseudo-Apollodorus, known as The Library).

To cut a long story short, in the beginning there was not only Chaos but also Gaia (Mother Earth), Tartarus (Ineffably Deep Abyss), and Eros (who in those times resembled rather Will To Procreate than Romantic Love). Then, Gaia gave birth, among other creatures, to Ouranos (Heaven) and Pontus (Sea), both of whom later fathered many children with her. This strange family had three main branches:

Yes, the Fates appear there twice, and yes, they are the same Fates, because their names are identical in both cases. Two identical sets of Fates look so uncanny that scholars usually believe one of them to be an interpolation.

There is also another poem by this author, but it is considerably less mythological and much more didactic.