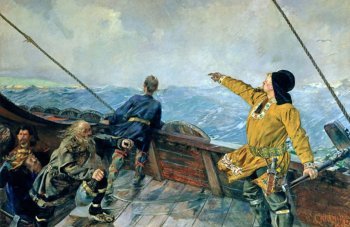 The so-called Vinland Sagas are two separate Icelandic sagas, The Saga of Erik the Red and The Saga of the Greenlanders, both composed around the early 13th century.

Both sagas recount the rocky life of Erik "the Red" Thorvaldsson, his many feuds that lead to him being banished from Norway and from Iceland, and his bold resolve to follow a sailor's yarn about an unknown land west of Iceland. Indeed he finds and explores an uninhabited country where he makes a new home for himself and his family, and which he dubs Greenland because "he said people would be attracted there if it had a favourable name" (Saga of Erik the Red).

The tale then moves on to the discovery of yet more uncharted shores in the West, Erik's son Leif's sojourn in a pleasant land he names Vinland, and the further voyages of Erik's children and other adventurous souls to explore the unknown parts. There follow encounters and fighting with the natives of Vinland, called Skraelings (skrælingjar) by the sagas, and an ambitious but ultimately futile attempt by Thorfinn Karlsefni and his wife Gudrid to settle in the new world.

There are also differences and even considerable contradictions between the two sagas. The most obvious is that The Saga of the Greenlanders tells of three more expeditions to Vinland after Leif's, while in the Saga of Erik the Red there is only one. In Erik the Red, the main heroes are Thorfinn Karlsefni and his wife Gudrid Thorbjarnardottir (formerly the wife of Thorstein Eriksson), while The Greenlanders gives more spotlight to Leif and his siblings.

By intention, the Vinland sagas are part family chronicles, part account of extraordinary voyages. Modern reception is chiefly driven by the wish to read them as historical sources which might direct archeologists to lost Norse settlements on the American continent. Success has been limited, as a site at L'Anse aux Meadows in Newfoundland (excavated 1961-68) remains the only confirmed Norse settlement in America ever found, and it is uncertain which of the places mentioned in the Vinland sagas should be identified with L'Anse aux Meadows (if any).

Not to be confused with the manga series Vinland Saga.

The Saga of Erik the Red can be read online here.