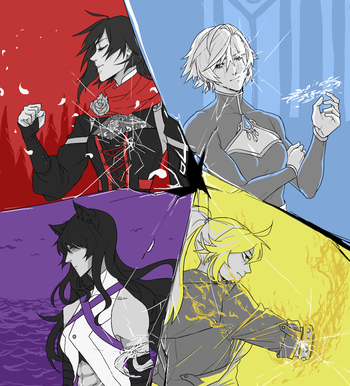 A girl who dreamed of being a hero, and was forced to face the realities of being one.
A girl who was born into everything but found she had nothing.
A girl who fought for freedom and is now tormented by her past.
And a girl who fights through life, trying to find her place in the world.
Advertisement:

on Archive of Our Own) is a retelling of the series RWBY. The story takes the base version of the cartoon and revamps it into a much darker story. RWBY: Scars began in 2016 so it adds in elements from later volumes into its chapters.

Team RWBY is a team of teenage Hunters-in-training who wish to try and better the harsh world they live in. However, they all have their troubled pasts and prejudices that they must deal with along the way.

Nora: I love it when you're rough!