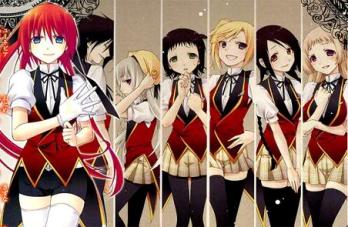 Think that group covers all the girl tropes...
Advertisement:

Shitsurakuen (literally translating as Paradise Lost) is a shonen manga written and illustrated by Tooru Naomura, who would later go on to illustrate Kakegurui. It ran in Gangan Joker from 2009 to 2011.

Our heroine, Sora Himoto, has just been accepted to the prestigious Utopia Gakuen. She meets one of her childhood friends and talks about her dream of becoming a knight who protects princesses. Upon getting to the highschool she sees two male students, each attended by a female student, engaged in some kind of duel. Upon losing, the defeated student breaks his dagger and the girl with him cries out in pain… and no one seems to care or notice.

The story draws inspiration from Revolutionary Girl Utena but with the bride/dueling mechanic extended to the entire student body. The school financers have taken it upon themselves to use sophisticated virtual reality to create an environment where gender (in)equality has been pushed back a few thousand years and then cranked up to eleven. The duels are part of a game called “Exaclan” where the male students are contestants and the female students are weapons to be used, wagered, traded, abused and discarded. The female students have no protections or rights of any kind against the player who currently owns them, and any girl without a master has no protections or rights of any kind, period.

Seeing that the situation is unfair (that is, screwed up beyond all belief), Sora starts about entering Exaclan and trying to start a one girl revolution that quickly turns to a one-girl-and-her-harem revolution.

A Character Sheet is now under construction. Feel free to contribute.