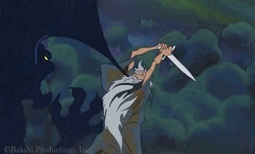 When the Grey has to die for the sake of the White.
"I never took the Kobayashi Maru test until now. What do you think of my solution?"
— Spock, Star Trek II: The Wrath of Khan

Essentially, this boils down to when a creator wants to convey some symbolism, and in order to do so someone either dies, is severely injured, falls ill, etc. It can apply to any character who happens to symbolize something. Insane character sacrifices themselves, means sanity is restored. Optimistic character falls into a coma, means optimism is wearing very thin, and so on. Death is often a popular option, due to being a somewhat safe bet to make an impact while not requiring being totally original. The character may die in the Crucified Hero Shot, often when their death represents something positive. It seems like whenever symbolism needs to be conveyed, someone simply has to be attacked or killed.

Examples often symbolize something of the work or an aspect of it, be it an event, change in character, or even the franchise itself, though it can reach outside these boundaries. They are deliberate as well, so don't look too far into works lest you find faux-examples as in What Do You Mean, It's Not Didactic? They are meant to be fully intentional and occasionally Word of God can confirm so. Rule of Symbolism may be employed in order to convey the symbol, especially in more abstract works.

See also It's All Junk, a very similar trope relating to the destruction of objects.

As a Death Trope, expect some unmarked spoilers.