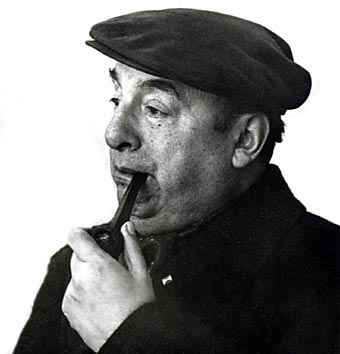 “Laughter is the language of the soul.”
— Pablo Neruda
Advertisement:

Pablo Neruda (born Ricardo Eliécer Neftalí Reyes Basoalto, July 12, 1904 – September 23, 1973) was one of the most famous and acclaimed poets of the 20th century. And maybe of all time.

An ardent communist, he became drawn to it during the Spanish Civil War. He was also an admirer of Stalin, but became disillusioned when he learned all the horrors of his regime and his cult of personality. He didn’t abandon communism, though.

He also was a diplomatic and a political figure in his native Chile, visiting a lot of countries which inspired some of his poems. When communism was declared illegal in 1948 he fled to Argentina, coming home in 1952. He tried to run for president in 1970, but eventually gave his support to socialist Salvador Allende, who won but eventually got deposed and died in a coup d’etat in September 11th, 1973. A little more than a week later, he died. Originally the cause of death was said to be heart failure. In 2013, however, a Chilean judge opened an investigation due to accusations that he was killed by the military dictatorship using poison. His body was ordered exhumed and lab tests were opened, though as of yet with no result.

His pen name Neruda came from the Czech poet Jan Neruda. Who knows about Pablo (The Other Wiki says it could be from Paul Verlaine).

He also collected houses; the three of them are open for tourists in Chile, with all the weird things he collected on display.

Some works by this poet are: