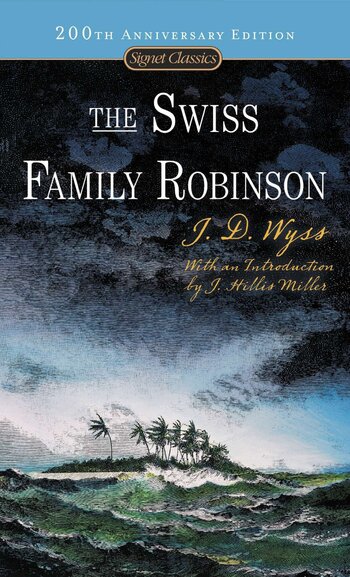 An 1812 novel by Johann David Wyss (and edited by his son Johann Rudolf Wyss) about a Swiss family (two parents, four sons - ages 15, 13, 10, and 7) shipwrecked en route to Australia and stranded on an island. Fortunately, their ship carried supplies for a new colony, and the island is furnished with an astounding diversity of flora and fauna.

For the father, this is an excellent opportunity to teach his children about nature, technology, resourcefulness, and morality.

Less of an actual story, and more of a list of useful facts to know when you're stranded on a deserted island.

Note: Robinson is not a Swiss name. The German name translates as "the Swiss Robinson". The popularity of Robinson Crusoe caused a flurry of stories about people on desert islands. This literature was called "Robinsons" (or Robinsonaden) and this particular novel was a "Robinson" about a Swiss family, not a Swiss family named Robinson.

It has been adapted to the screen a number of times, most famously as a Disney feature film in 1960.