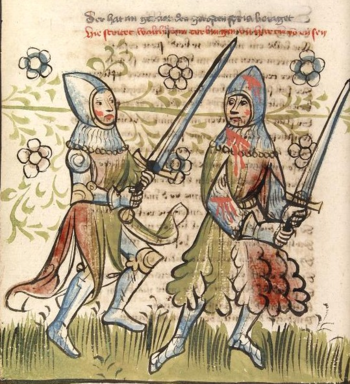 Waltharius is an early medieval epic poem, written in Latin hexameter by a German monk, telling of the exploits of the Visigothic hero Walther of Aquitaine. The author was very likely a resident of the monastery of St. Gall in Switzerland, and may have been a certain Ekkehard (c. 910—973).

From the land of Pannonia, Attila the Hun leads his armies to bully the kingdoms of Western Europe. In exchange for peace, three royal children are sent as hostages to the Hunnish court: Hagen, nephew of the king of the Franks, Hiltgunt, daughter of the king of Burgundy, and Walther, son of the king of Aquitaine. Attila treats his hostages well, and as the children come of age, Hagen and Walther are made captains in the Hunnish army, and Hiltgunt becomes the royal treasurer.

When a new war between Franks and Huns looms on the horizon, Hagen bails out and escapes to his homeland. Walther and Hiltgunt, who love each other, stay behind; but knowing that Attila will neither allow them to be together nor to leave, they hatch a plan of elopement and put it into action, but not without helping themselves to two chests of gold from Attila's treasury.

All goes well for the lovers until they reach the land of the Franks whose new king, Gunther, sees a welcome opportunity to get his hands on Attila's gold. With twelve of his best warriors, the king sets out and demands Walther to give up Hiltgunt and the gold. Walther's offers of compromise are ignored. In spite of Hagen's earnest warnings, the king orders his champions to take on Walther in single combat.