Literature / The Prophecy of the Stones 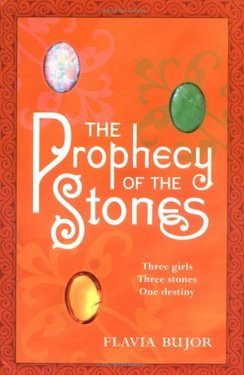 Three Stones, three young girls.
One will discover the Gift.
One will recognize the King.
One will convince the two others to die.
Of three Stones only one fate will remain.
Advertisement:

In Paris, a 14-year-old girl named Joa is succumbing to illness in a hospital. She is kept alive only by a "dream" of a fantasy world, where three girls—Jade, Opal, and Amber—are chosen by a prophecy to restore goodness to the world. The girls have nothing in common. Jade is the spoiled daughter of a Duke; Opal is a quiet, seemingly emotionless strange girl; Amber is an impoverished but kindhearted peasant. Strangers at first and forced to go on a quest together because of the prophecy, they ultimately become true companions after their shared ordeals.

Each of them is given a precious stone corresponding to their names and they attempt to unravel the meaning behind the stones and the prophecy. Their quest leads them to participate in a rebellion against the evil Council of Twelve, travel through the pristine, magical realm of Fairy Tale, and visit the Anthropomorphic Personification of Death. They discover from an oracle that they must defeat the Council of Twelve for good in order to fulfill the prophecy and free the land. In order to do this, they must find "The Chosen One" who will lead the Army of Light in the final battle.

This was written by French teen Flavia Bujor who wrote the novel over 6 months while she was 13 years old.