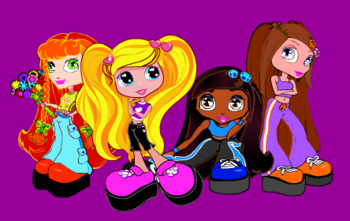 We know what's up!note Left to right: Summer, Alexa, Tia and Nikki. Not pictured: Miranda.
Diva Starz were a line of dolls created and released by Mattel in the early 21st century.
Advertisement:

The toyline follows a group of teenagers who "know what's up" and are "in-the-know" about everything. The girls are:

The doll line was shut down in 2004 due to poor sales.