Manga / Baby and Me 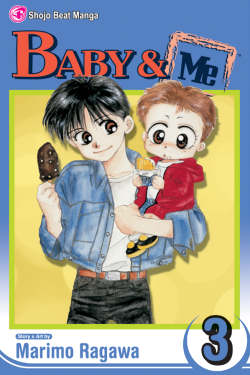 "Bwaza!"
Baby and Me is a Shoujo Slice of Life manga by Marimo Ragawa, which ran from 1991 to 1997. It was translated into English in its entirety by VIZ Media. An anime adaptation was made as well, but it has not received an official English translation.
Advertisement:

The series concerns a boy named Takuya and his brother Minoru. As their mother has just died and their father works long hours to support the family, Takuya finds himself tasked with constantly looking after his little brother. Initially, Takuya is resentful towards Minoru, but over time he learns to accept his responsibility. After that, the two are nigh inseparable, and the rest of the series follows their day-to-day activities as they learn more about themselves, their parents, their friends and neighbors, and the world around them.

Not to be confused with the similarly named and themed Korean film Baby and I, which also features a young man caring for an abandoned child. Also compare Aishiteruze Baby.

Baby and Me provides examples of: